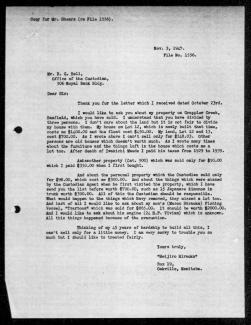 Thank you for the letter which I received dated October 23rd.

I would like to ask you about my property on Grappler Creek, Bamfield, which you have sold. I understand that you have divided by three persons. I don't care about the land but it is not fair to divide my house with them. My house on Lot 12, which is newly built that time costs me $1400.00 and the float cost $450.00. My land, Lot 12 and 13, cost $700.00. As I wrote above I can't sell only for $348.03. Other persons are old houses which doesn't worth much. As I wrote many times about the furniture and the things left in the house which costs me a lot too. After death of Iwakichi Maede I paid his taxes from 1929 to 1939.

And about the personal property which the Custodian sold only for $98.00, which cost me $300.00. And about the things which were missed by the Custodian Agent when he first visited the property, which I have send you the list before worth $700.00, such as 15 Japanese Kimonos in trunk worth $300.00. All of this the Custodian should be responsible. What would happen to the things which Navy removed, they missed a lot too. And last of all I would like to ask about my son's (Masao Hiraoka) Fishing Vessel, "Tzartoos" which was sold for $865.00. It should be worth $2000.00. And I would like to ask about his engine (24 H.P. [horse power] Vivian) which is unknown. All this things happened because of the evacuation.

Thinking of my 45 years of hardship to build all this, I can't sell only for a little money. I am very sorry to trouble you so much but I should like to treated fairly.