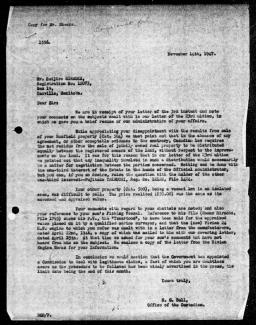 We are in receipt of your letter of the 3rd instant and note your comments on the subjects dealt with in our letter of the 23rd ultimo, in which we gave you a brief resume of our administration of your affairs.

While appreciating your disappointment with the results from sale of your Bamfield property (Cat. 504) we must point out that in the absense of any agreement, or other acceptable evidence to the contrary, Canadian law requires that net residue from the sale of jointly owned real property to be distributed equally between the registered owners of the land, without respect to the improvements on the land. It was for this reason that in our letter of the 23rd ultimo we pointed out that any inequality involved in such a distribution would necessarily be a matter for negotiation between the parties concerned. Nothing can be done with the one-third interest of the Estate in the hands of the Official Administrator, but you can, if you so desire, raise the question with the holder of the other one-third interest--Fujitaka Takkuchi, Reg. No. 12128, File 1424.

Your other property (Cat. 500), being a vacant lot in an isolated area, was difficult to sell. The price realized ($50.00) as the same as its assessed and appraised value.

Your comments with regard to your chattels are noted; and also your reference to your son's Fishing Vessel. Reference to his file (Masao Hiraoka, File 1793) shows his F.V. the "Tzaartoos", to have been sold for the appraised value place on it by a qualified marine surveyor, and that the (new) Vivial 24 H.P. [horse power] engine to which you refer was dealt with in a letter from the manufacturers dated April 22, 1946, a copy of which was mailed to him with our covering letter, dated April 25th. At that time we asked for your son's comments but have not heard from him on the subject. We enclose a copy of the letter from the Vivian Engine Works for your information.

In conclusion we would mention that the Government has appointed a Commission to deal with legitimate claims, a fact of which you are doubtless aware as the procedure to by folowed has been widely advertised in the press, the limit date being the end of this month.

R.G. Bell,
Office of the Custodian