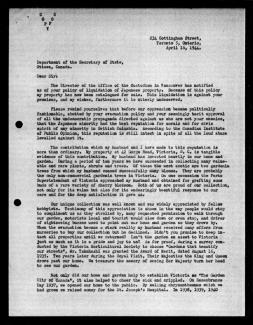 Image Description
Scanned black-and white microfilm of a typewritten copy of a letter to Department of the Secretary of State from Toyo Takahashi regarding about dispossession of their property. Annotation reads "Copy". Page 1 of 2.
Additional Image 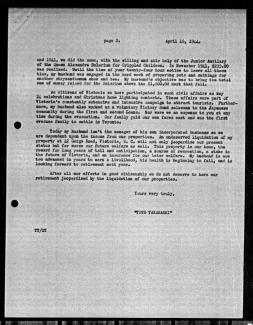 Additional Image Description
Scanned black-and-white microfilm of a type written copy of a protest letter to Department of the Secretary of State from Toyo Takahashi regarding about dispossession of their property. Annotation reads "Copy". Page 2 of 2.
Sender's Address
234 Cottingham Street,
Toronto 5, Ontario
Recipient Address
​Department of the Secretary of State,
Ottawa, Canada
Body

The Director of the Office of the Custodian in Vancouver has notified us of your policy of liquidation of Japanese property. Because of this policy my property has now been cataloged for sale. This liquidation is against your promise, and my wishes, furthermore it is utterly undeserved.

Please remind yourselves that before our oppression became politically fashionable, abetted by your evacuation policy and your seemingly tacit approval of all the undemocratic propaganda directed against us who are not your enemies, that the Japanese minority had the best reputation for morals and for civic spirit of any minority in British Columbia. According to the Canadian Institute of Public Opinion, this reputation is still intact in spite of all the loud abuse leveled against it.

The contribution which my husband and I have made to this reputation is more than ordinary. My property at 42 Gorge Road, Victoria, B.C. is tangible evidence of this contribution. My husband has invested heavily in our home and garden. During a period of ten years we have succeeded in collecting many valuable and rare plants, shrubs and trees. Of these the most exotic are two gardenia trees from which my husband coaxed successfully many blooms. They are probably the only non-commercial gardenia trees in Victoria. On one occasion the Parks Superintendent of Victoria approached my husband and obtained for grafting some buds of a rare variety of cherry blossom. Both of us are proud of our collection, not only for its value but also for its endearingly beautiful response to our care and for the deep satisfaction it gave us.

Our unique collection was well known and was widely appreciated by fellow hobbyists. Testimony of this appreciation is shown in the way people would stop to compliment us as they strolled by, many requested permission to walk through our garden, motorists local and tourist would slow down or even stop, and driver of sightseeing busses used to point out our home and garden as they drove by. When the evacuation became a stark reality my husband received many offers from nurseries to buy our collection but he declined. Didn't you promise to keep intact all properties until we returned? Isn't the garden an asset to Victoria just as much as it is a pride and joy to us? As for proof, during a survey conducted by the Victoria Horticultural Society to choose "Gardens that beautify our streets", Mr. Takahashi was granted the Award of Merit, dated August 16, 1935. Two years later during the Royal Visit, Their Majesties the King and Queen drove past our home. We treasure the memory of seeing Her Majesty turn her head to see our garden.

Not only did our home and garden help to establish Victoria as "The Garden City of Canada", it also helped to cheer the sick and crippled. On Remembrance Day 1937, we opened our home to the public. By selling chrysanthemums which we had grown we raised money for the St. Joseph's Hospital. In 1938, 1939, 1940 and 1941, we did the same, with the willing and able help of the Junior Auxiliary of the Queen Alexandra Solarium for Crippled Children. In November 1941, $233.00 was realized. Until the time of your twenty-four hour notice to leave all these ties, my husband was engaged in the hard work of preparing pots and cuttings for another chrysanthemum show and tea. My husband's objective was to bring the total sum of money raised for the Solarium above the $1,000.00 mark that fall.

As citizens of Victoria we have participated in such civic affairs as May 24 celebrations and Christmas home lighting contests. These affairs were part of Victoria's constantly extensive and intensive campaign to attract tourists. Furthermore, my husband also worked as a voluntary Victory Bond salesman to the Japanese community during the first and second Loans. Nor were we an expense to you at any time during the evacuation. Our family paid our own fares east and was the first evacuee family to settle in Toronto.

Today my husband isn't the manager of his own incorporated business so we are dependent upon the income from our properties. An undeserved liquidation of my property at 42 Gorge Road, Victoria, B.C. will not only jeopardize our present status but far worse our future welfare as well. This property is our home, the reward for long years of toil and anticipation, a source of recreation, a stake in the future of Victoria, and an insurance for our later welfare. My husband is now too advanced in years to earn a livelihood, his health is beginning to fail, and is looking forward to retirement next year.

After all our efforts in good citizenship we do not deserve to have our retirement jeopardized by the liquidation of our properties.